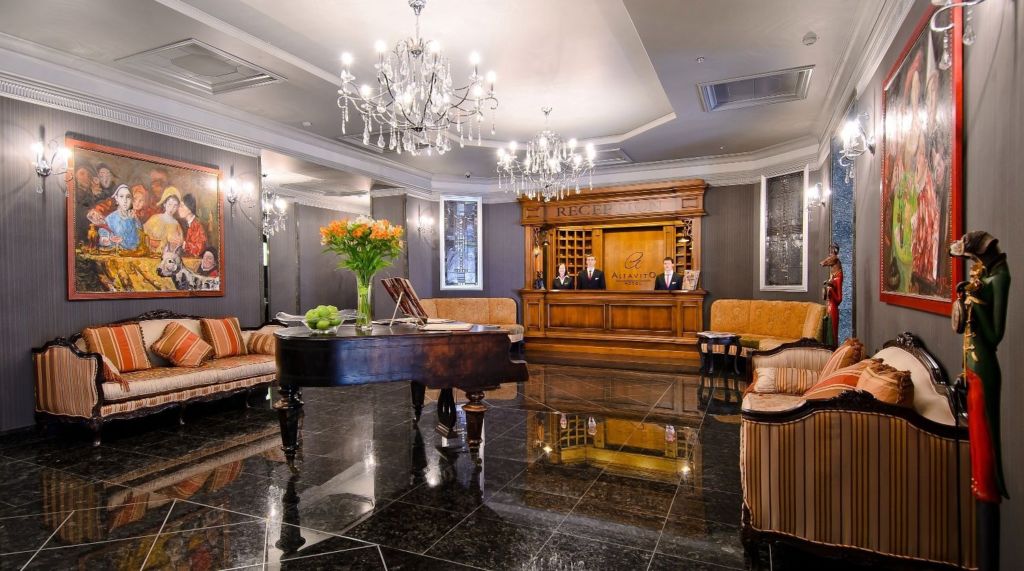 The elegant 4-star ALFAVITO Kyiv Hotel is located in one of the business districts of central Kiev next to the Palace “Ukraina” Underground Station. It is within 10 minutes’ walk from the central main street, Khreschatyk and Maidan Nezalezhnosti and only 15 minutes’ walk from Olimpiysky Stadium. The hotel offers 229 comfortable guest rooms, including rooms of Standard and Superior categories, and VIP category – Deluxe, Suites and Apartments.

Gourmet international dishes and local specialties are served at the PIANO, where a buffet breakfast is also provided. Guest can enjoy a European cuisine in the FORTE Café-bar, test grill menu in the summertime, or relax in the lobby bar with a cup of genuine Viennese coffee.

The Hotel facilities also include 8 conference-halls which capacity starts from 10 till 150 persons, a business center, a concierge service, an art gallery, a gym with free access around the clock, 68 free private parking spaces on site. ALFAVITO Kyiv Hotel – one of the few hotels in Kiev city center with its small park.

In 2017 ALFAVITO Hotel become the best 4-star hotel complex according to Kyiv Tourism Awards and once again got the “Travellers’ Choice” 2017 award from TripAdvisor as one of the Top 9 Hotels in Kyiv and Top 15 Hotels in Ukraine. International Hospitality Awards 2016 has selected ALFAVITO Hotel as a winner in the category – Best program for corporate & social responsibility. In 2015, the ALFAVITO hotel was awarded as “The Best Business Hotel 4* in Ukraine” according to the National Award “Hospitality Awards-2015”. The Hotel became the owner of “Certificate of Excellence” and “Travellers’ Choice” by Trip Advisor (2013, 2014, 2015, 2016, 2017 and 2018) and deservedly, two years in a row, received the “Best Art Hotel of Ukraine” award (2012 and 2013). The ALFAVITO – the first Ukrainian hotel which successfully passed the certification of the Association of Business Travel (ABT) and was awarded as “Business and Conference Hotel” and in addition became the owner of a distinctive badge of quality “Top Quality Hotel” from HRS.

We use cookies to ensure our website works properly and to collect statistics about users in order for us to improve the website. If you continue to browse this site you will accept our use of cookies.